Type III population stars were the first very massive hypothetical stars of 100 to 300 solar masses which may have shone for a brief time (less than I million years each). In the theory of stellar evolution it is well known that the more massive a star, the faster it consumes its thermonuclear fuel. Population III stars therefore ceased to exist a long time ago and are perhaps at the origin of very distant gamma-ray bursts. It is thought that they were formed during the Dark Ages and are largely responsible for the gradual reionisation of the universe during the "Cosmic Renaissance".

Initially they only contained the elements of primordial nucleosynthesis, meaning that their metallicity was virtually nil, in particular with no carbon, nitrogen, oxygen and certainly no iron.

On the other hand, as they ended their lives as supernovae, they enriched the interstellar medium in heavy elements such as iron. Many black holes are also considered to have formed following these supernovae.

These stars are enigmatic because, although independent observations and simulations indicate that they were indeed formed, when the physics of their formation is examined in detail they should not have been formed at all! 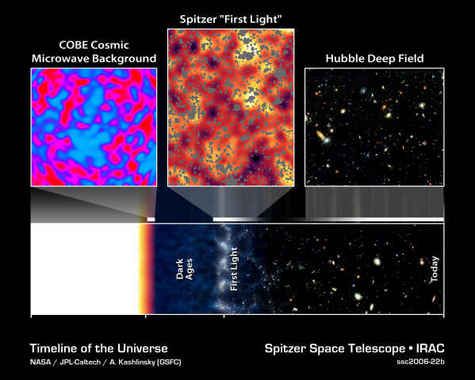 The history of the first billions of years of the universe.