The Franco-American Topex-Poseidon satellite was launched by an Ariane 4 rocket in August 1992 into a quasi-circular orbit inclined at 66 degrees from the equator at an altitude of 1336 km.

On board the satellite, apart from the spatial positioning systems (laser reflectors, DORIS radio wave system and Global Positioning System), there was radar instrumentation for measuring its altitude from the surface of the sea very accurately (+/- 2-3 cm). This instrumentation consisted of two TOPEX altimeters (ALT, NASA) and Poseidon (SSALT, CNES).

There were two objectives of the mission, which had a 10-day repeat period. The first was to establish highly accurate topography of the ocean mean surface, and the second to observe the variation over time of the instantaneous surface in the short and long terms. This mission was part of studies on global climate change and its interaction with the major ocean currents.

Since 15 September 2002, Topex/Poseidon was on a new orbit, halfway between its old traces (which are now covered by Jason-1). This tandem scientific phase illustrates the possibilities of a constellation of optimised altimetric satellites.

The mission officially ended in January 2006, following an incident on one of the satellite flywheels in October 2005. 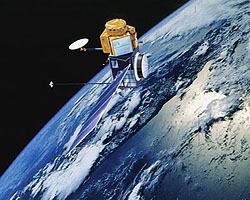