The NASA STEREO mission was chosen in 2000 and it was launched on 26 October 2006 at 00h52 UT from Cape Canaveral by a Delta II rocket. Its main objective is a three-dimensional study of corona dynamics as well as of the structure, evolution and interaction of ejections from the coronal mass with the interplanetary medium. This study is being carried out from two identical satellites providing stereoscopic vision. These satellites carry powerful imaging devices together with in situ and radio instruments.

The purpose of the STEREO mission is to provide new information on solar flares and their effects on the Earth's environment. To obtain stereoscopic images of the flares, one satellite orbits ahead of the Earth around the Sun and the other follows. The satellite images are combined with the "in situ" data and with the data from Earth observatories and low orbit satellites to provide three-dimensional monitoring of magnetic energy storage, the ejection and trajectory of coronal material in the interplanetary medium. When the flare reaches Earth's orbit, the magnetometers and plasma measuring instruments on board the STEREO satellites make it possible to analyse the ejected material and unambiguously relate it to its solar source. 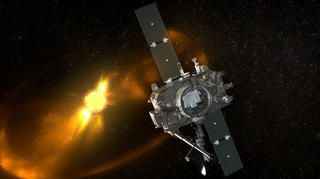 Artist's view of the STEREO Mission