The SPOT 5 (Système Pour l’Observation de la Terre or "System for Earth Observation") satellite was launched on 4 May 2002 from the Kourou space base.

It differed from previous SPOT satellites by better image resolution using high resolution visible and near infrared sensors, the two twinned instruments capturing multispectral images with a resolution of 10 m. The following table shows how the capacities of the sensor, now called High Resolution Geometric ( HRG) improved compared with satellites 1 to 4.

The resolution in the panchromatic spectral band (all of the visible) went from 10 to 5 m.

Only the middle infrared band remained at a resolution of 20 m.

The imaging instruments have a feature allowing a very high resolution image to be obtained. From the panchromatic 5 m channels, equipped with a double row of detectors with 12,000 juxtaposed offset photodiodes, two 5 m resolution images are acquired simultaneously. The data received then undergoes complex processing on the ground (interleaving, interpolation, merging) to produce a 2.5 m resolution image. This new technique opens up possibilities in the urban, precision agricultural and reconnaissance domains.

SPOT 5 also has a stereoscopic system called HRS for quasi-simultaneous 20° forward and 20° rear imaging 600km along the satellite's path over a width of 120 km. This stereoscopy can be used to build digital models of the land.

SPOT 5 also carries the wide-field Végétation 2 sensor, which has a 1Km resolution over a2400km stretch. This wide field allows the daily coverage of the Earth's surface, providing a regular report on the state of the planet's plant life. 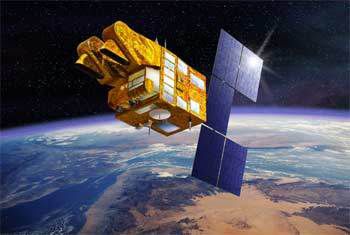