Spokes are lines or rays that briefly cross the rings of Saturn before disappearing for a few years. They are composed of charged dust particles measuring less than a micron which are moved by a magnetic field.

The Voyager probe observed Saturn's spokes in the 1980s, followed by the Hubble space telescope in the 1990s. In 2004, the Cassini probe approached Saturn and it was seen that the spokes crossing the rings had disappeared.

The reasons for the successive appearances and disappearances of the spokes remained undetermined for a long time.

On 17 March 2006, Colin Mitchell, Horanyi, and their colleagues hypothesised that the presence or not of the spokes depended on the angle of the rings with the Sun. Thus, when this angle decreases, conditions are more favourable for their appearance. Researchers estimate that the limit angle for the formation of the spokes is 20 degrees. 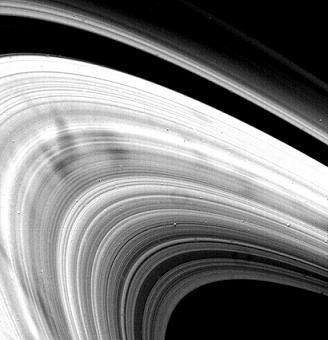 The spokes in Saturn's rings. Their appearance and disappearance depends on the angle formed by the plane of the rings with the Sun. (Credits: NASA/JPL)