The Spitzer space telescope (infrared observatory) was placed in orbit on 25 August 2003 by a Boeing Delta II rocket launched from the American base at Cape Canaveral (Kennedy Space Center). The planned service life was two and a half years, but this was extended until the liquid helium ran out in 2009. Spitzer completes the NASA range of space telescopes: Hubble, Chandra and Compton (taken out of orbit in to 2000).

From its heliocentric orbit with its back to the Sun, it has been studying the formation of stars and planets. It has observed the universe as it was billions of years ago and should help scientists to determine how and when the first objects were formed, as well as their composition.

It can also discover objects never observed before because they were hidden by the interstellar dust, such as the most distant stars and galaxies, and observe the coldest objects in the Solar System (outer planets, asteroids and other small bodies) and the disks of dust around young stars (proto-planetary disks).

The telescope has an 85 centimetre mirror and three cryogenically cooled instruments: a near and mid infrared camera, a spectrograph to analyse all infrared wavelengths and a photometer to collect information in the far infrared region. 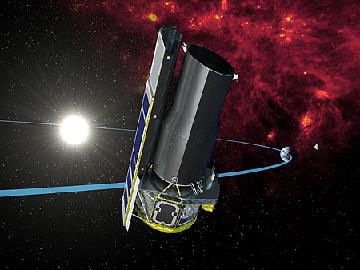