The objective of the SOHO mission is to study the internal structure of the Sun, the heat in its atmosphere and the origins of solar wind. The SOHO space probe is the fruit of collaboration between NASA and the ESA. It was launched on 2 December 1995 from the Cape Canaveral base (USA) by an Atlas II rocket. It has been operational since 1996; its mission was initially extended to 2007 but it is still operational (2012).

It was placed in orbit around the Earth at the Lagrange L2 point between the Earth and the Sun at about one and a half million kilometres from the Earth.

SOHO is a fully-fledged sun observatory. It is a platform carrying twelve instruments that continuously observe the Sun, measuring the electromagnetic radiation (from the visible to extreme ultraviolet and X-ray, using spectroscopy and/or imaging), to fulfil the three main objectives of the research programme: 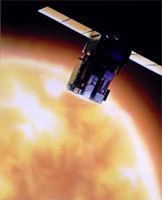