The Shoemaker-Levy 9 comet (SL9) made it possible to experience a live cosmic catastrophe. In 1993 a strange comet appeared in telescope fields: still a long way from the Sun, it had an unusual stretched out appearance (left hand image). A little later, this little comet was seen to have shattered into over 20 pieces because it passed a little too near to Jupiter (in 1992) of which the gravitational field had a devastating effect. Each of the pieces became a small comet.

But the influence of Jupiter on the orbit of SL9 was such that it was calculated that it would crash into Jupiter the next time it passed in July 1994.

On 19 July 1994, the announced catastrophe occurred: comet Shoemaker-Levy 9 crashed into Jupiter releasing considerable energy; a cloud of dust bigger than the Earth floated in Jupiter's atmosphere for several months. 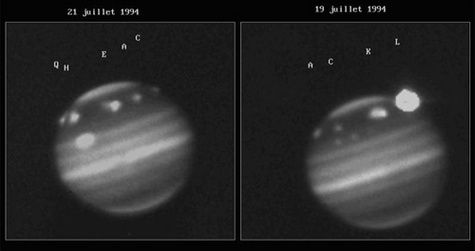 The crash of SL9 into Jupiter