Shenzhou: Shenzou is a Chinese space capsule built in collaboration between China and Russia. This is the capsule in which the taikonaut Yang Liwei made the first manned space flight in Chinese history in October 2003.

The Shenzhou programme was launched on 7 April 1992. If the Chinese capsule looks much like a Soyuz, this is not a coincidence. Indeed, Shenzhou contains 27 major components of the Soyuz, including the escape tower, the aerodynamic flaps, thermal control, emergency survival system, docking system etc. However, the sizes and weights of the two capsules are different. The Shenzhou capsule is 2.8 metres in diameter and 8.8 metres long. It weighs 8.4 tonnes and has two main parts:

The Shenzhou capsule has two main parts: the orbital module and the re-entry module
(Credits: Wikipedia) 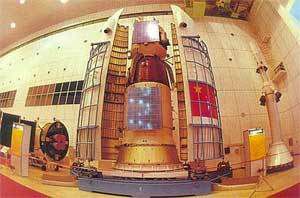 The Shenzhou V capsule being fitted