Sea Launch is a company that has a space rocket launch base, called Odyssey, floating in the Pacific ocean exactly on the equator 2253 km south of Hawaii.

Originally, it was the largest existing oil rig (132 m by 67 m). It was built in Japan in the 1980s; it is self-propelled and was refitted in Norway. Its structure of some 30,000 tonnes of steel includes the launch pad for the Zenit satellite launcher, service hangars and the pillars resting on two enormous catamaran-style floats. Its home port is Long Beach, California. Its first test in 1999 was successful, but Sea Launch filed for bankruptcy in 2009; it has since merged with the Russian company Energia as majority shareholder. 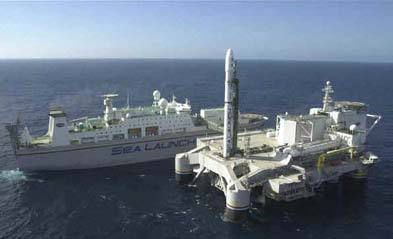 On Sea Launch, satellites are launched from a semi-submersible platform.