Ralph is an instrument on board the New Horizons probe, it is used to study the morphology and geology of the surface. It will map the distribution of surface constituents and temperatures.

It will be using Ralph that the New Horizons probe will look at Pluto, its moons and later on one or more objects in the Kuiper belt. Ralph will work in association with the Alice spectrometer, the names being inspired by the Ralph and Alice couple in the American"The Honeymooners" TV show.

Ralph is equipped with three black and white panchromatic filters and four colour filters positioned in front of a visible light imager, the MVIC (Multispectral Visible Imaging Camera), together with an infrared imager, LEISA (Linear Etalon Imaging Spectral Array). LEISA is an ultra-miniaturised spectrometer, sensitive in the 1.25 to 2 micron band in the far infrared, designed and built by scientists at the NASA Goddard Space Flight Center. MVIC will thus cover the whole spectrum between 0.4 and 0.95 microns.

The instrument will take pairs of images to create 3-dimensional views of the surfaces it flies over, in black and white and colour, at a resolution of 250 metres per pixel. With these results, scientists will not only obtain precise knowledge of Pluto's topography, but will also refine their knowledge of the orbits of Charon and the other moons. Ralph will also carry out systematic research on clouds and other atmospheric meteors and any unknown rings and satellites in Pluto's environment. Note that the extreme sensitivity of MVIC will enable it to observe the dark face of Pluto lit merely by its satellite Charon. 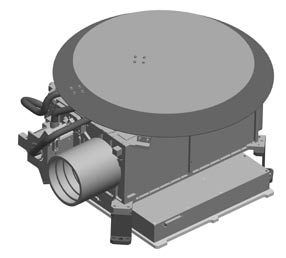 The Ralph instrument is on board New Horizons. (Credits: NASA)