When it was discovered by Clyde Tombaugh in 1930, Pluto was considered as the ninth planet in the solar system. But by the end of the 20th century, other quite similar objects had been discovered, such as Eris, that were slightly bigger. It rapidly became clear that these small bodies, many of which remain to be discovered, did not have the features to classify them as planets and the International Astronomical Union (IAU) redefined the notion of planet in August 2006.

This is how the dwarf planet category was created, to which Pluto and Eris belong. At the outset, the IAU decided to honour Pluto by making it the prototype of a new category of trans-neptunian objects: the plutoids.

Following this change, the number of planets in the solar system was reduced to eight. Pluto itself was given the number 134340 in the catalogue of minor objects.

Even when in the region of its perihelion, Pluto has an apparent diameter of 0.2 seconds of angle, less than the resolution limit of most terrestrial telescopes. On photographic plates it thus appears as a faint luminous point lost among the twenty million stars on the celestial vault, that are at least as bright. Only its movement reveals Pluto : when two photographs of the same star field taken at an interval of several hours are compared, one can see that the luminous spot has moved in relation to the stars (at the time of opposition, the movement can reach 1 second of angle per day). It was by using this method that Clyde William Tombaugh identified Pluto on 18 February 1930.

Like the other planets, its name comes from Greek mythology: Pluto. This name referred both to the god of the underworld and to the initials of Sir Percival Lowell, the astronomer who had undertaken the search on the basis of disturbances observed in the orbits of Uranus and Neptune as soon as 1894, but who died in 1916 leaving a large part of his immense personal fortune as a legacy to continue the research.

But later measurements invalidated the mathematical origin of the discovery of Pluto, because not only is its mass much too small to cause any significant disturbance of the movements of Uranus and Neptune , and furthermore, these had been significantly overestimated following observational errors. It appeared therefore that the discovery was due to chance but that the calculation errors had led astronomers to search in the right place!

The surface of Pluto is still a great mystery, although the first images showing a few details were published in 1994 and 1995.

But several important discoveries have been made over recent decades. In 1976, spectroscopic observations revealed that the surface of Pluto is at least partially, and perhaps totally, covered with frozen methane. In 1978 a satellite, Charon, was discovered. Between 1979 and 1995, the diameter and mass of Pluto were correctly measured: at 2300 in diameter, this planetoid is smaller than the Moon and its mass five hundred times less than that of the Earth. In 1988, the observation of an occultation of a star by Pluto showed that it had an atmosphere.

Pluto makes one revolution of the Sun in 247.7 years on a trajectory that is neither circular nor in the ecliptic plane, inclined at 17 degrees. This exceptional inclination makes it deviate from the ecliptic plane by 1.25 billion kilometres, approximately the distance from the Sun to Saturn. The eccentricity of this orbit (0.25) brings Pluto inside Neptune's orbit, which happened between 1989 and 1999.

Although their orbits appear to cross, Neptune and Pluto will never collide because the difference in inclination of their orbits leaves a wide safety margin, and they can never come closer than 2.5 billion kilometres.

Not only is the perihelion of Pluto far from Neptune's orbit, but the movements of Pluto and Neptune on their orbits are synchronised in such a way that, when Pluto goes through its perihelion, Neptune is in its orbit more than 60 degrees away relative to the Sun. The mean period of Pluto's orbit around the Sun is exactly 1.5 times Neptune's, so that every 495 years (the time for Neptune to make three revolutions around the Sun and Pluto two) both planets are in the same relative position. When Neptune, moving along its orbit, "passes" Pluto, Pluto is at its aphelion. This synchronisation is obviously not accidental: it is a dynamic phenomenon called "stable resonance".

Resonance effects like this play an essential role in the movement of planets and satellites in the solar system, and go a long way to explain the current configuration. The planets and their main satellites move in such a way that there is no risk of collision. If a small disturbingforce were exerted on Pluto to modify its movement around the Sun, the resonance with Neptune would bring it back to its current state of resonance. If in the distant past Pluto was in a non-resonant orbit close to the current orbit, the disturbing force of Neptune changed its orbit until it was "locked" forever in its current state of resonance.

Infrared observations have identified methane on Pluto's surface. These observations appear to indicate that the surface of the planet is dark and reddish at the equator and that the polar regions are covered in frozen methane. The brightness of the polar icecaps changes as the distance from the Sun varies. Seasonal phenomena related to the sublimation of frozen methane heated by the Sun spread over the surface of Pluto. On the other hand, the surface of Charon appears to be covered, not with methane but with water ice.

When the occultation of a magnitude 12 star by Pluto was observed on 9 June 1988, it revealed an atmosphere around Pluto, which appeared to be composed of methane and a heavier gas (perhaps carbon dioxide or nitrogen). The atmospheric pressure at the surface only reaches one hundred thousandth of the pressure on Earth. Pluto's atmosphere varies considerably during the seasons, with maximum pressure at the perihelion following vaporisation of gases, and may be reduced by a factor of ten at the aphelion.

Charon was discovered in 1978. It is half the diameter of Pluto, and the barycentre of the two bodies is beyond the surface of Pluto, at about two Pluto radii.

Charon's orbit is inclined 118 degrees relative to that of Pluto in its movement around the Sun. While rotating around Pluto, Charon passes in front of and behind the planetoid. These eclipses and occultations, which have been observed since 1985, have made it possible to measure the diameters of both bodies and their reflecting powers. Charon orbits at about 19 000 kilometres from Pluto and its diameter is about 1190 kilometres. The period of revolution of Charon (6.39 days) is equal to the period of rotation of Pluto. Pluto's albedo is of the order of 50% and Charon's 37%. Both bodies have a density of the order of 2.

The American probe New Horizons, launched on 19 January 2006, is cuurently on the way to Pluto, and will be its first visitor. After being given a gravitational boost by Jupiter, it will arrive at its closest to its destination in the summer of 2015, after a 6.4 billion kilometre journey. Observations will begin about five months before its closest approach and should continue for about one month afterwards. The space vessel is carrying imaging, spectrometry and other measuring instruments to determine the geological and morphological characteristics of Pluto and its moon Charon, and also to map the elements making up its surface and to study Pluto’s atmosphere (composition and escape rate). The mission also includes a fly-over of objects in the Kuiper belt around 2022. 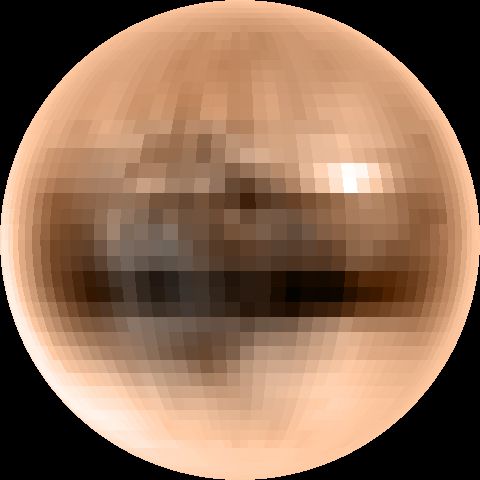