The Planck satellite was launched in July 2008 by the Ariane 5 rocket from the site in Kourou, along with the Herschel satellite. Planck and Herschel separated immediately after the launch to reach different orbits around the L2 Lagrangian point. At this point, satellites can point continuously away from the Sun, minimising solar thermal noise.

The main scientific specification of the Planck mission was to measure fluctuations in the Cosmic microwave background (CMB) with a minimum accuracy of ΔT/T = 2.10-6 and a resolution of less than 10' of arc.

To map the fluctuations in the CMB, the Planck satellite was placed at the Lagrangian point L2 where it made a complete survey of the sky over a period of 15 months.

It was stabilised by a spinning motion. It rotated at one revolution per minute and the axis of rotation of the satellite was fixed for one hour. Then every hour, its axis of rotation was redirected in steps of about 3' of arc. The satellite also followed a nutation (swaying) movement on its orbit. Using this measurement strategy, Planck swept through all directions in the sky five times between its launch and 13 January 2012, when it ran out of helium.

The measurements made by Planck were stored on board and then transmitted to the ground via the new ESA receiving station in Australia. The Planck mission had 2.5 hours daily broadcasting time. The data speed of the link was 1.5 Mbits/s in direct line of sight of the station. The data was compressed on board before transmission, with a compression ratio of 4. This daily rendezvous with the Australian station was also used to control the satellite's orbit.

Planck carried two instruments, placed in the focal plane of the telescope: 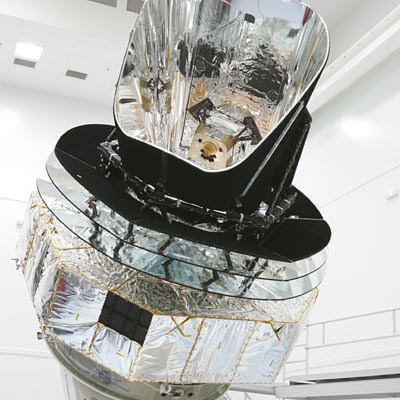