Since 1991, the "Nuits des étoiles" have been attended by the public free of charge throughout France, and for several years now in European and North African countries, to share a passion for astronomy for one or more nights in August.

Volunteers from astronomy clubs and various bodies work to show the young and the old astronomy with telescope observations, exhibitions, planetarium shows, talks, games etc. All this is free and open to the general public.

Until 2002, the "Nuit des étoiles" was broadcast on television in France. There were live link-ups with observation sites and many features on astronomy.

Since 2000, the events have taken place over 3 days and the concept has been exported outside France. 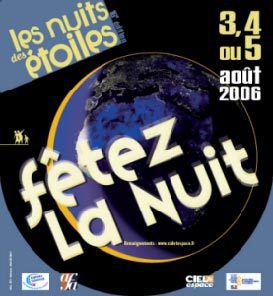