Neptune, the eighth planet in the solar system, has a nearly circular orbit about 4.5 billion kilometres from the Sun that it takes 165 years to complete. Its equatorial plane is inclined 30° from its orbital plane. Although it is three times smaller than Jupiter, Neptune is a giant planet 99% of which is hydrogen and helium. With a diameter of 49,520 kilometres, Neptune is very slightly smaller than Uranus. However, it has a slightly higher mass, of the order of 17.2 times that of the Earth (compared with 14.5 times for Uranus), giving it the highest mean density of the giant planets (1.76 g/cm3). As Neptune is considerably less massive than Jupiter or Saturn, and therefore less "compressed" by gravity, it contains a larger proportion of elements heavier than hydrogen or helium.

The discovery of Neptune generated great excitement in the 19th century. It was a milestone in the history of science because it represented a triumph for celestial mechanics: an object 4 billion kilometres from Earth had been discovered by calculation! At the end of the 18th century, astronomers were unable to make their calculations agree with observations of Uranus. Alexis Bouvard, an astronomer at the Paris observatory, was one of the first to notice the "irregularities" in the movement of Uranus. The French mathematician François Arago came up with the idea that an unknown object was disrupting its orbit, and independently, the Englishman John Couch Adams in 1843 and Urbain Jean Joseph Le Verrier in 1846 calculated the position and mass of this body accurately enough for it to be discovered in the constellation of Aquarius.

Little attention was given to Adams' prediction: Cambridge university had no up to date maps of the constellation of Aquarius, and Adams' colleagues did not give much help to this new researcher who they considered too young to have made such a prediction. But on 23 September 1846, on the same day that he received a letter from Le Verrier, Johann Gottfried Galle discovered the new planet at the Berlin observatory, at less than 1 degree from the predicted position. By a curious coincidence, two hundred and thirty three years previously Neptune was close in angle to Jupiter during the winter of 1612 to 1613 and Galileo, observing Jupiter on 28 December 1612 and on 22 January 1613 had included Neptune on his drawings, thinking it was a star.

Neptune is an eighth magnitude object, and therefore invisible to the naked eye. Through a telescope it is a bluish-green disk with an apparent diameter of the order of 2 seconds of arc; a few marks are visible with difficulty in its atmosphere.

Before the Voyager 2 probe flew past Neptune, only two satellites, Triton and Nereid, were known. They are known as irregular satellites because they have unusual orbits: Triton has a retrograde movement on a very inclined orbit compared to Neptune's equatorial plane, and Nereid has a highly eccentric orbit. In 1989, the images from Voyager 2 revealed six new satellites forming a regular system rotating in a direct movement on slightly inclined circular orbits.

Triton was discovered on 10 October 1846 by William Lassell, only seventeen days after the discovery of the planet itself. Like the other giant planets, Neptune has rings, but they are very particular: they contain arcs of material. The discovery of these arcs from the Earth by star occultation observations in 1984 and 1985 led to the Voyager 2 programme being modified to better study Neptune's environment. The probe revealed that the planet is surrounded by a complete system of tenuous rings, one of which, called the Adams ring, contains five arcs, which have been named Fraternité, Égalité 1 and 2, Liberté, and Courage.

For a long time astronomers wondered why Saturn seemed to be the only planet surrounded by rings. The discovery, in the space of a decade, of rings around Jupiter, Uranus and Neptune showed that this phenomenon was natural around giant planets. However, these four ring systems are very different from each other: with its rings, satellites and planets, the solar system is incredibly diverse!

The rings of Neptune. Here the planet is occulted to avoid the halo of light.

Voyager-2 sent radio waves to probe through the atmosphere and complete observations in the visible, ultraviolet and infrared.

Like Uranus, Neptune has a reducing atmosphere, rich in hydrogen (unlike Earth, which has an oxidising atmosphere, rich in oxygen); it contains about 25% of helium and at least 1% of methane. The blue colour of this planet is largely due to the absorption of red light by methane. In the upper atmosphere, at a pressure of the order of several hectopascals, molecules of methane (CH4), dissociated by solar radiation, recombine to form hydrocarbons such as ethane (C2H4) and acetylene (C2H2), which were detected by Voyager-2. Lower down, at a level of around 1300 hectopascals, the methane condenses into crystals of methane ice. Lower still, at 3000 hectopascals, there is thought to be a layer of hydrogen sulphide (H2S). There may also be ammonia (NH3) at this level. Voyager-2's infrared detectors measured an average temperature of - 214°C (59 K). The equatorial and polar regions are at approximately the same temperature; the intermediate regions are a few degrees colder. Where the Sunlight is at its strongest at the moment, i.e. at these intermediate latitudes, the gas rises and cools as it does on Uranus. Towards the equator and the poles, it drops back down and is compressed and heated. When the energy sent by Neptune into space is calculated, the result is that it releases 2.7 times more energy into space than it receives from the sun The origin of this surplus energy has not yet been explained.

Eight days before flying past Neptune, Voyager 2 detected regular bursts of radio waves, the first signs of the planet's magnetic field. As the magnetic field is generated by electrical currents circulating at great depth, scientists came to the conclusion that there was an internal rotation period equal to the interval between two bursts (16h 7 min). Neptune is slightly flattened because of its rotation. The polar radius, measured at a pressure of 1000 hectopascals (the pressure on Earth at sea level), is slightly less than the equatorial radius: 24,340 and 24,764 kilometres, respectively.

Neptune has a magnetosphere of which the magnetic dipole's axis is inclined 47° relative to the axis of rotation. It is also asymmetrical: the source of the magnetic field is not in the core but halfway between the centre and the exterior of the planet. When Voyager 2 flew by Neptune, the magnetic pole was pointing at less than 20° from the direction of the Sun, and the probe penetrated into Neptune's magnetosphere through the polar cusp, where the solar wind particles can penetrate deeply before being repelled. Apart from Earth, this was the first time that a magnetic polar region had been explored by a space probe. These observations are very important to gaining a better understanding of planet magnetospheres. Neptune's is the least intense in the solar system: along the magnetic equator, where there is the highest concentration of charged particles, Voyager 2 found only 1.4 protons or heavier particles per cubic centimetre, three times fewer than around Uranus and three thousand times fewer than around Jupiter.

The ultraviolet instrument detected an aurora (much weaker than those observed around the other giant planets) and a slight diffuse luminescence on the night side of Neptune. 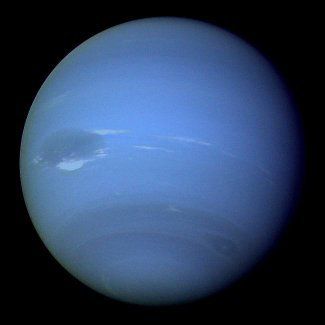