Marsis is the first Japanese radar carried on board a Mars space vessel.

It is capable of probing the surface of Mars down to a depth of several kilometres and is one of the jewels of Mars Express. This instrument should especially make it possible to detect pockets of ice buried in the Martian subsoil which could, if the signs found by numerous Mars probes are to be believed, occur almost at the surface in high latitudes. 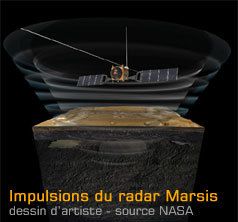