The Mars Sample Return mission plans to send a probe into orbit around Mars and a lander to the surface of Mars. The lander will collect samples of Martian soil, then once the operation is complete the samples will leave the lander by means of a mini-rocket which will take them into orbit around Mars where the orbiter will be waiting.

The orbiter will retrieve the samples in orbit using a laser guidance system and then will leave the Martian orbit for Earth. Once it has arrived in orbit around the Earth, the orbiter will jettison the samples to Earth where they will be carefully recovered and analysed.

The GBMSR mission is to gather samples from Mars and bring them back to Earth. It has been named "Ground breaking" because, although its concept is scientifically sound, it is much simpler and easier than the more sophisticated sample return mission that includes a mobile vehicle capable of selecting the rock samples to be brought back. This would be a preliminary test mission before a MSR (Mars Sample Return) mission with a rover.

GBMSR has two identical landers, each with an extensible arm carrying very simple sampling devices and a camera. The landers are each equipped with a reascension stage to send the samples to earth.

The mission profile provides for each capsule to receive 500 grams of dust, crushed rock and Martian atmosphere. The targeted spots will be those of special interest for a future manned mission.

This mission includes a rover of the Spirit type (MER Mission) but capable of collecting small samples of soil and putting them in a container, plus a vehicle to return them to Earth. 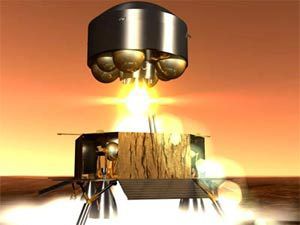