The Mars Polar Lander was the Mars Surveyor 98 lander for the mission launched on 3 January 1999. It should have landed at less than 1000 kilometres from the Martian south pole. It was to have studied the meteorological conditions near the pole and the composition of the soil (especially the presence of water and carbon dioxide). The objective was also to dig small trenches to examine the different soil layers. The probe was also carrying two small probes called Deep Space 2.

After an 11 month journey, the lander entered the Martian atmosphere. It should first have been slowed down by simple aerodynamic braking, then by a parachute and, in the final seconds of its descent, thrusters were to provide the final braking. Just after the probe had entered the atmosphere, the two Deep Space 2 probes should have been ejected. They should then have descended in free fall and buried themselves at a depth of 30 to 100 centimetres in the Martian soil. These probes were designed to look for water in the soil.

Just before the descent communications with Earth were lost. They were never re-established after landing, neither with the MPL, nor with the two Deep Space 2 probes. 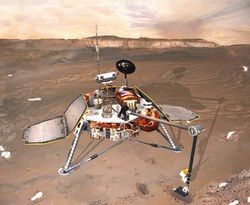