Mars Odyssey was launched from Cape Canaveral, in Florida, on 7 April 2001 by a Delta II rocket. Injection into Mars orbit occurred on 24 October 2001 at 3h26 (GMT). After a 20-minute propulsive manoeuvre, the probe was inserted into an orbit with a period of 18 hours 36 minutes (the aerocapture technique was initially to have been used, but was abandoned). The precision of orbit insertion was impressive, with the point of insertion being reached to within a kilometre!

NASA approved the extension of this mission until September 2006, so as to be able to compare the planet year on year. 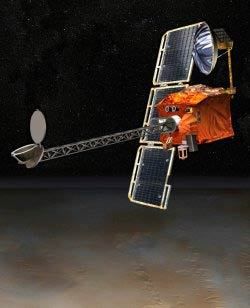