Mariner 10 was the second American Mariner programme probe, and also the first to exploit the effects of a gravitation reaction.

Launched on 3 November 1973 from Cape Canaveral, it reached the neighbourhood of Venus on 5 February 1974 and sent back about 4000 photographs. It also measured the planet's rotation speed (243 days) and showed that its magnetic field was no higher than 0.05% of the Earth's magnetic field.

Using Venus to curve its trajectory, Mariner 10 reached Mercury for the first time on 29 March 1974, flying over the planet at 705 km from the surface and sending images that revealed an intensely cratered surface. Mariner 10 was placed in solar orbit and flew over Mercury again from 20 to 23 September 1974 at 48,096 km, then in March 1975 at only 327 km.

Mariner 10 was also the first space vehicle to use the principle of the solar sail. After an attitude control failure in the probe, technicians decided to position the solar panels to use radiation pressure to stabilise the orientation of the three axes. 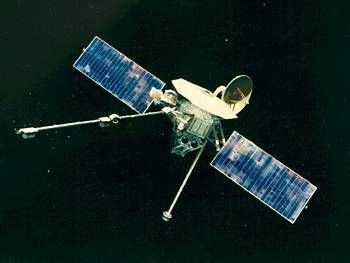