The Lunar Reconnaissance Orbiter (LRO) is a NASA probe for studying the Moon. It was launched on 18 June 2009.

The purpose of the mission is to map the surface of the Moon with a hitherto unequalled accuracy, to study its radiation environment and above all to search for any ice that may be present.

Some scientific experiments have been developed with this objective.

TheDiviner instrument will make a temperature map of the surface so that regions where there could be ice can be rapidly identified.

The LAMP project (Lyman-Alpha Mapping Project) is to detect the presence of ice at the bottom of lunar craters using a probe observing in the ultraviolet.

TheLOLA instrument (Lunar Orbiter Laser Altimeter) has made a precise relief map of the Moon, and measured the refractive index of reflection of the surface. On December 17, 2010, a topographic map of the Moon was made available to the public. In this way it was be able to detect any ice crystals.

TheLEND instrument (Lunar Exploration Neutron Detector), developed by the Moscow Institute for Space Research, will study the level of neutron emission caused by cosmic rays bombarding the Moon; this level varies depending on the composition of the surface.

In a one-year mission, the LRO probe orbited the Moon at about 50 kilometres in an exploration phase, ending in September 2010. In October of the same year, two lunar impacts were made in the search for water and there was evidence of both water and hydroxyl ions in a crater (Cabeus) near the south pole. Other probes will follow to prepare for a manned mission to the Moon before 2020. 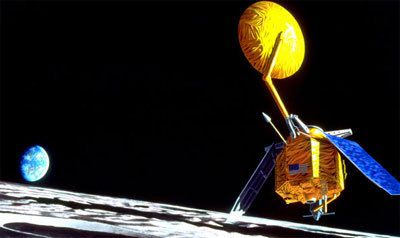