Le LCROSS (Lunar CRater Observation and Sensing Satellite) was the name of a mission that NASA carried out in 2009, in parallel with the LRO (Lunar Reconnaissance Orbiter).

During the LCROSS mission, an impact vessel was directed at the Moon at the same time as the LRO.

The impact vessel had two main parts: the Shepherding Spacecraft (S-S/C) and the Earth Departure Upper Stage (EDUS). The two modules travelled together until the neighbourhood of the Moon, then the upper stage (the EDUS) separated and collided with a crater (Cabeus) at the south pole of the Moon.

When the impactor collided with the surface it ejected a plume of debris, releasing kinetic energy equivalent to the explosion of 1,. 000 tonnes of TNT, but the plume was not as visually prominent as predicted. However, water was detected in the plume. The Shepherding Spacecraft observed the plume, flying through it and analysing its components, especially looking for the presence of water.

Once it had completed its analyses, the Shepherding Spacecraft in turn became an impactor, producing a second plume visible to the orbiter and terrestrial telescopes. 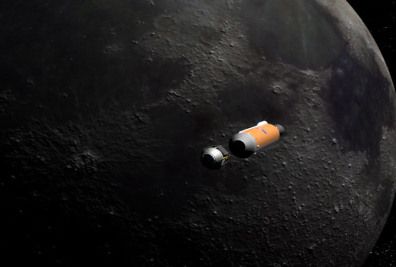