The Launcher Integration Building is 58 metres tall and is used to assemble the stages of a launcher.

One of the upper stages (EPS or ESC-A depending on the mission) is positioned at the top of the main stage, as is the launcher's equipment bay.

The Ariane 5 launcher is connected to the launch pad by an umbilical cord of a height of 30 metres. Once the operations are finished in the Launcher Integration Building, the launch pad and the assembled launcher are transferred to the Final Assembly Building on a double rail track. 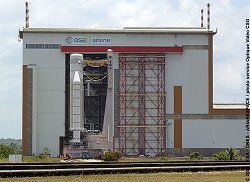