Kliper was a space vessel 10 m long with a diameter of about 3 m, designed to stay in orbit for about 10 days. It was to have had a mass of 14.5 tonnes, and would have carried 2 pilots and up to 4 passengers or, in the cargo version, 2 pilots and up to 700 kg of payload. Energia had been working on its development since 2000. However, its design went back to the early 1990s when Russia was considering a larger space vehicle that would have used the Angara or Zenith rockets for launching.

The third part of the vessel was to have been expendable. This was the service module essentially built around a modified Soyuz capsule. It would have been equipped with solar panels and a docking system for the Space Station. Finally, it would have housed all the life-support equipment for the crew, plus the tanks (fuel, oxygen, water).

No final choice was made for the landing system and two mission profiles were studied. RKK Energia designed a winged version of the vessel, which would have allowed it to glide down and land like the American shuttles. The other mission profile was the standard landing system used by the Soyuz which had proved itself many times over. The Kliper would have used a system of three uncontrolled parachutes and several small engines which would have been ignited shortly before landing. With this system the vessel would have been able to land within a radius of less than 1 kilometre from the planned spot on terra firma. Energia considered developing a system with an inflatable cushion to lessen the shock on the ground and which would have allowed a sea landing 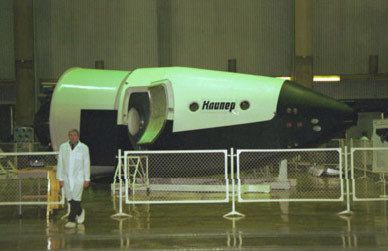