The HUYGENS probe is 350 kg of concentrated technology. Its purpose was to study the chemical composition of the atmosphere and surface of Titan.

Huygens separated from Cassini on 25 December 2004 for a 20-day journey towards Titan. The probe landed as planned on the surface of Titan on 14 January 2005 and sent back the first photos. These reveal an active geology, similar to Io, making Titan an exceptional satellite in our solar system. 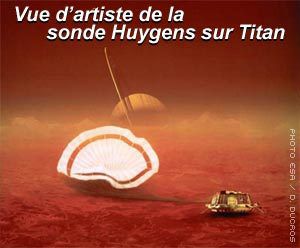