This is undoubtedly the best known comet. In 1705, the English astronomer Edmond Halley calculated the return of a comet for 1759. He had noted the periodic return of the comet every 76 years. Sure enough, in 1758, sixteen years after his death and only a few months in advance, the comet returned.

The nucleus of the comet is composed of a mixture of ice and dust particles. It is irregular in shape and measures 16 km long by 8 km wide. Hills, valleys and even craters can be made out on its surface; gas escapes from the craters, feeding the comet's tail.

Its first known appearance was in 240 BCE, and its latest was in the winter of 1986. 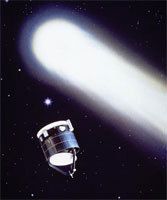