Gas giants are massive, low density planets composed essentially of hydrogen and helium with traces of methane, water and ammonia. They were first observed in the solar system, and now about 200 around other stars in the galaxy are known. They are sometimes called Jovian planets after the planet Jupiter. Comparative sizes of the gas giants in the solar system (Credit: NASA).

In the middle of the 1990s, the big surprise about these exoplanets was that they orbit at only around 10 million kilometres from their star! Unlike those in the solar system of which the temperature is well below zero, the temperature of these exceeds that of Mercury. For this reason they are called hot Jupiters. 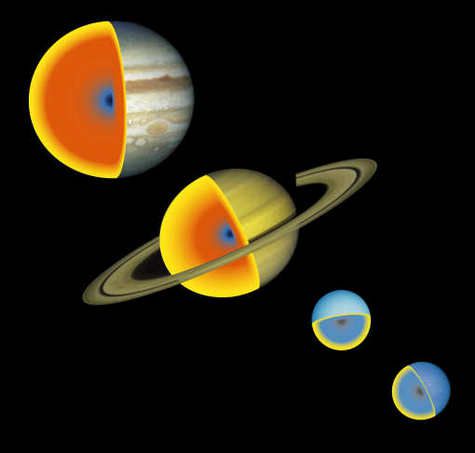 Inside gas giants The ice and rock are shown in blue and black respectively. In red, yellow molecular hydrogen becomes metallic under the pressure. Possible models deduced from observations by space probes. (Credit: Tristan Gui