The Gaia satellite has been announced as the successor to the Hipparcos satellite, and should carry on its mission. Its launch is planned for August 2013. Gaia will map the part of the Milky Way surrounding the solar system and in doing so will plot the precise positions and velocities of over a billion stars.

Gaia will be placed in orbit around a Lagrangian L2 point - a stable point 1.5 million kilometres from Earth in the opposite direction from the Sun. Its three telescopes will cover the whole of the sky and will record all the visible sources.

During its 5 year mission, Gaia will observe each of the billion stars that it maps over a hundred times. On the way, it will also provide important data on the existence of thousands of extrasolar planets and discover several tens of thousands of new bodies – comets and asteroids – in our own solar system.

And finally, the Gaia satellite will allow us to observe the effects of general relativity with unparalleled precision, including how the Sun bends light from stars in the rest of the sky. It is hoped that this will give us a first glimpse of the structure of space-time. 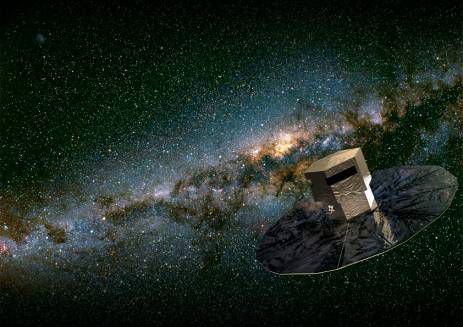 Gaia mapping the stars in the Milky Way. The programme was approved by the ESA in 2000, and it is planned to launch it in 2013.