Among the eight planets in the solar system, the Earth is one of the four telluric planets, which are solid and composed of silicate rocks and iron with similar average densities (between 3.9 for Mars and 6.1 for Mercury); the average density of our planet is 5.52 g/cm3.

Structure of the Earth

The density of surface rocks, 2.7 g/cm3, is very different from that of the Earth as a whole, 5.52 g/cm3, and the composition is assumed to vary with depth. When we take into account the mainly granitic nature of the surface rocks, the mainly basaltic rocks from magma ejected by volcanoes and the iron-nickel composition of most meteorites, we may deduce that the Earth is made up of three nested envelopes: the sial - silica and aluminium - for the surface, the sima - silica and magnesium - beneath, and down to the nife - nickel and iron - at the centre of the earth, and this arrangement accounts for the overall density of the planet. At the beginning of the 20th century, Alfred Wegener made use of this idea before it evolved into the crust-mantle-core model.

With seismology, it became possible to measure these three envelopes: the Mohorovicic discontinuity, or moho, at an average depth of around 30 kilometres, marked by the reflection and refraction of seismic rays, is the boundary between the crust and the mantle; the Gutenberg discontinuity, at a depth of around 2900 kilometres, is the boundary between the mantle and the core. Both bear the name of their discoverers (the Croatian Andrija Mohorovicic and the German Beno Gutenberg), the former since 1909 and the latter since 1921. Later on, the crust was divided into an upper crust and a lower crust, separated by the often-contested Conrad discontinuity, while at the centre of the Earth a solid core more than 5000 kilometres deep has been identified.

There are some essential points concerning the crust. Firstly, the oceanic crust is different from the continental crust, as Gutenberg showed in 1921: the former is "basaltic" while the latter is "granitic", at least on average. Secondly, the continental crust thickens under the mountain chains, into a root that can reach a thickness of 70 kilometres under the Peruvian and Bolivian mountain chains (Andes).

A deeper study of the transmission speeds of seismic waves in the surface regions - carried out in the Tonga archipelago, in the south-west Pacific, by Jack Oliver and Bryan L. Isacks in 1967 - enabled a distinction to be made between the solid and the viscous parts, seismic waves travelling faster in the former than in the latter. A distinction was thus made between the solid lithosphere, on average 100 kilometres thick, comprising the crust and the upper mantle, and the rest of the mantle, the viscous asthenosphere. These distinctions, covering those of the crust and the mantle, but with different boundaries, are the basis of plate tectonics.

Then the application of the methods of deep seismic reflection adapted to seismic oil exploration, yielded information on the structure of the crust. There was the American Cocorp (Consortium for Continental Refraction Profiling) programme , and the French E.C.O.R.S. programme (the study of continents and oceans by seismic reflection).

Lastly, with progress in the study of seismic wave propagation, slow hot zones and faster cold zones were distinguished in the mantle. This three-dimensional tomography of the mantle validated the concept of convection currents, rising at the (mid)-oceanic ridges, where hot material rises up from the lower mantle, falling at the ocean peripheries, where the cold lithosphere penetrates. It is the hotspots dispersed at the base of the mantle that determine the permanent rising of mantle that causes continuous volcanic activity.

Chemical composition of the Earth

Deuterium, lithium and beryllium on Earth were probably formed in the galaxy through the action of galactic cosmic rays on the interstellar medium in the period preceding the formation of the solar system. The radioactive elements (e.g. uranium and thorium) were similarly produced by one or more supernova explosions in the galaxy, before the formation of the Sun. There are some anomalies, and these are explained simply by the evaporation of volatile compounds during the formation of Planetesimals. The primitive Earth atmosphere, created in a reducing environment, was probably composed mainly of methane, ammonia and water vapour; its modern composition is the result of the dissociation of these molecules by solar radiation, followed by evaporation of hydrogen and subsequent oxidation reactions, and by several million years of biological phenomena (chlorophylian assimilation) leading to the production of oxygen; some elements such as helium come simply from the grinding by erosion of radioactive rocks. 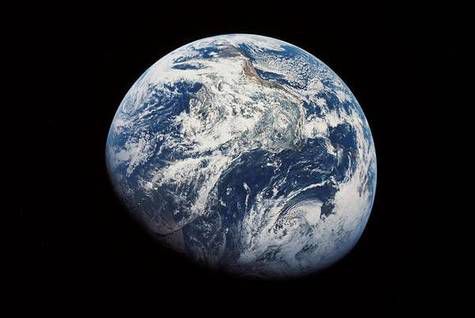 The Earth, seen from Apollo 8