The CryoSat mission was developed as part of the ESA's Earth observation programme to observe the polar regions. It is an altimetric mission wholly devoted to a study of the variations in mass of the polar icecaps and ice floes.

Over a period of 3 years CryoSat will study the height and thickness of the ice. The objective: to better understand the complex interactions between the ocean, the cryosphere and the atmosphere, and in particular heat transfer in ocean movements. These measurements should help to predict the melting of glaciers resulting from climate change.

The first CryoSat was put into orbit by a Russian Rockot launcher on 8 October 2005 from the Plessetsk space centre in Russia, but a fault in the launcher's engine caused it to disintegrate. However, CryoSat-2 was successfully launched on 8 April 2010. 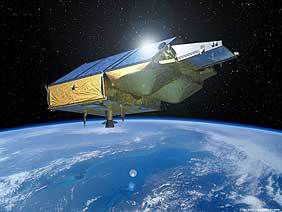