The CoRoT space observatory (COnvection, ROtation &amp; Transits planétaires), initiated by the CNES and implemented in partnership with the CNRS, the ESA, Austria, Belgium, Germany, Spain and Brazil, has a 27 cm afocal telescope and a wide field camera with four ultra-sensitive CCD detectors on board. Its mission: to study the internal structure of the stars in order to deduce their mass, their age and their composition, and to search for extra-solar planets around nearby stars.

CoRoT was launched on Wednesday 27 December 2006 at 14h23 UT by a Soyuz 2.1b rocket from the Baikonur cosmodrome and put into a circular polar orbit at 896 km inclined at 90°, an ideal situation from which it can continuously scrutinise any point in the sky for 150 days without the least interruption, and without being occulted by the mass of our planet.

Corot's telescope is planned to successively observe five different parts of the sky thereby collecting a large number of measurements on the structures of thousands of stars. All this data will be extremely valuable because it will give direct access to the chemical elements making up the universe (which form in the stars).

CoRoT is also to carry out extremely high precision and long duration photometric measurements of stars likely to be orbited by planets. These can be detected by measuring the recorded photometric reading that will show the low variation in brightness caused by the passage of the planetary disk in front of its star.

If Corot discovers other planets many possibilities of inhabitable celestial bodies will be opened up. It could well be that bodies similar to the Earth could exist in other systems. By observing these other systems, scientists hope to improve their knowledge of the formation of our own solar system.

This stakes of this mission are both fundamental and twofold: detecting possible life forms and advancing the quest for our origins. 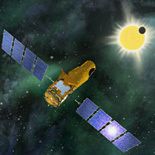