Columbus is one of the main modules of the International Space Station, a multi-purpose state-of-the-art laboratory. It will make it possible to conduct many experiments in life sciences, as well as studies of metals and fluids. Scientists hope to develop new technologies there by studying fundamental physics. Nearly 500 experiments are to be carried out every year in the operational lifetime of Columbus which is estimated to be ten years.

It measures 6.7 m long with a diameter of 4.5 m, weighs 9.9 tonnes without its 5 tonnes of research equipment, including 10 payload racks to accommodate interchangeable science payloads. Science payloads will also be installed on four pallets outside the module in the vacuum of space. They will be used to carry out experiments on new technologies, Earth observation and astronomy.

Columbus was built by a European consortium of 41 companies from 14 countries, with DASA (Deutsche Aero-Space, which became Daimler Chrysler Aerospace in 1995) as the overall prime contractor .

It was launched and sent to the International Space Station on 7 February 2008. 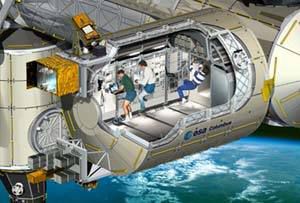