Columbia was an American space shuttle built after Enterprise. It was the first to make a space flight (on 19 March 1981). It made 28 successful space flights totalling nearly 300 days in orbit and circling the Earth 4808 times. Its career was punctuated by several incidents: during a test, with the deaths of two technicians, but above all on 1 February 2003 when a piece of insulation fell off, causing its disintegration and the deaths of the seven crew members. 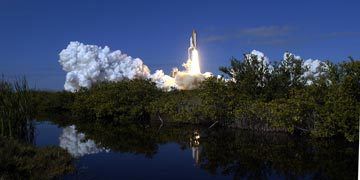 The shuttle Columbia (STS-107) being launched for the last time.