Coronal mass ejections are caused by powerful magnetic explosions in the Sun's corona which project the ionised plasma into interplanetary space, together with the associated neutral gas by collision. Coronal mass ejections carry billions of tonnes of matter. The expansion of the plasma which was initially compressed by the great pressures on the surface of the Sun in low density interplanetary space, increases its volume to sizes bigger than the Sun. A gigantic ball of plasma speeds away from the Sun at supersonic speeds greater than 300,000 km/h, opening the lines of force of the solar magnetic field.

On arrival near the Earth after three or four days, the CME interacts with the Earth's magnetic field producing aurorae borealis and australis and geomagnetic storms, disrupting radio communications, satellites and electricity distribution systems. 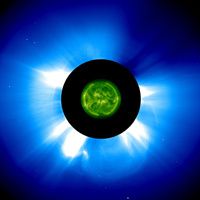