Chandrayaan-1 is an Indian automatic lunar probe (ISRO, Indian Space Research Organization) launched from the Sriharikota base on 22 October 2008, on a PSLV rocket equipped with Psom-XL thrusters. It was initially placed in a 500 x 5000 km elliptical orbit around the Moon on 4 November 2008; this was gradually brought to a 100 x 100 km circular polar orbit on 8 November 2008.

Its mission was to completely map the surface of the Moon, analyse the mineralogical composition of the soil, study the Moon's crust to better understand its evolution and to look for water in the polar regions. The data from Chandrayaan-1 was also used to make 3D maps of some regions of the Moon, and will be used to analyse magnetic anomalies detected by other missions.

The probe mission was planned to last two years but it ended after 312 days owing to a technical failure, after completing 95% of its objectives.

Chandrayaan-1 also carried an impactor designed to strike lunar soil near the south pole, which sent images and data on the very weak atmosphere during its descent. 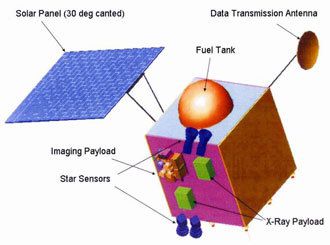