On arriving close to Mercury, Bepi Colombo will have to withstand temperatures up to 250°C, a challenge given that normally, space missions take place in very cold environments. Bepi Colombo will use electric propulsion, a technological process already tested by Smart-1 and extremely interesting from a cost and performance point of view.

Models of Bepi Colombo are currently undergoing shock and vibration tests. Launch is planned in 2015. After a journey of over 4 years, it will arrive near Mercury and send images and data back to Earth.

Mercury is the least visited planet in the solar system (after Pluto). It is too close to the Sun for observations from Earth, and many questions about it remain unanswered. What can we learn about the formation of the solar system and telluric planets? Why has Mercury such a high density? Is Mercury's core solid or liquid? Why does such a small planet have a magnetic field whereas Venus, Mars and The Moon have none? Why do spectroscopic observations not show iron to be present, when it is assumed to be the main constituent of Mercury? Do craters permanently in the shade really contain water?

The Bepi Colombo mission is one of the ESA's most ambitious, and it will attempt to answer these questions within the next fifteen years or so. 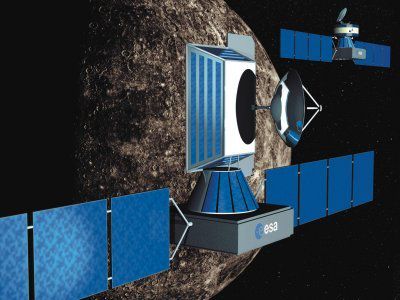