The Beagle 2 project was proposed by Colin Pillinger of the Open University in Great Britain in response to requests for proposals for the selection of the Mars Express payload in 1997. The name Beagle 2 was chosen in homage to Charles Darwin who travelled on HMS Beagle during his voyages around the world, and which allowed him to write his thesis on the evolution of species. Beagle 2 was a small lander weighing 60 kg including the 30 kg instrumentation module that was to have analysed Martian material to search for proofs of former life, or even life today.

First radio contact with Beagle 2 was expected a little after touchdown time, but no signal was received. Over the days and weeks that followed, many attempts to make radio contact were made, but in vain. By the beginning of February 2004 it had become clear that all possibility of communicating with Beagle 2 had disappeared and it was decided that the ESA and the United Kingdom would carry out a joint enquiry to try to understand the circumstances and the reasons for the failure of the Beagle 2 mission.

The Commission of Enquiry was made up of high-level European directors and specialists, together with NASA staff and Russian experts, and it met several times in the United Kingdom and at the ESA headquarters. After interviewing the key players in the mission - the directors, managers, scientists and engineers who had participated in the development of Beagle 2, it published its conclusions, assessments and recommendations.

The report was submitted to the UK Minister for science and innovation and to the Director General of the ESA, who accepted it. No single failure or technical malfunction was identified as being at the origin of the loss of Beagle 2, bur several credible causes were put forward. Still more importantly, the Commission clearly stated that programming and organisational reasons had led to a high risk of failure for Beagle 2.

The review conducted by the Commission of Enquiry led to the issuing of 19 recommendations addressed to the authorities in Britain and the ESA. These recommendations form the basis of lessons for the future. Both parties fully accepted them. The ESA is to take a certain number of measures with a view to applying the recommendations. 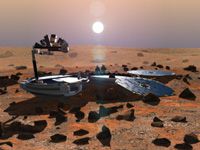