It was from Baikonur that the first ever man made satellite, Sputnik, was launched in 1957. In 1961 the first man in space, Yuri Gagarin also took off from Baikonur. The base was created in 1955 and is now used for all manned flight launches from Russia, such as those to the ISS.

The Baikonur cosmodrome is in Kazakhstan near the river Syr Daria and the town of Tyuratam (the town of Baikonur is actually 380 km from there).

The first rocket (the intercontinental SS-6 missile) was launched in 1957. Among the launchers currently developed at Baikonur are the Proton and Energia rockets. 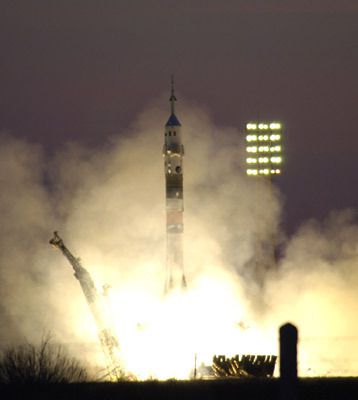 Launch of the Eneide mission to the ISS from Baikonour