Aurora is a technological programme proposed by the ESA for the approval of the delegates and ratified by the ESA Council at ministerial level in Edinburgh on 14 and 15 November 2002.

Prepared jointly by the Scientific Programme Management and Microgravity and Manned flight Management, Aurora's main objective is to develop the necessary technologies and skill network in Europe to achieve human exploration of Mars, and to draw up a long term European exploration plan, by man or robots, of objects in the solar system and in particular those that could contain traces of life.

The programme is multidisciplinary. It covers many fields of space research.

The first (2005 - 2015) is to acquire knowledge and to develop and demonstrate the technologies required for a manned mission to Mars and the Moon, to be able to decide whether or not to carry out such a mission.

This initial phase will be followed by a second phase (2015-2030) devoted to developing, verifying and implementing the European components of a manned mission, which will doubtless be carried out on an international scale.

The ExoMars mission to assess the Martian biological environment before landing other vehicles or humans on the planet.

A Mars Sample Return mission with a descent module and an Earth return vehicle. The Sample Return mission will drop a sampling platform to the surface of Mars together with the vehicle to bring it back up into orbit. For this phase, limited landing accuracy is required. The sample will be delivered in a container to an orbit at 150 km altitude. The Earth return vehicle will then recover it and will release it once it returns to Earth orbit in an atmospheric re-entry ballistic trajectory. Protection on arrival will be provided by a parachute or an inflatable system. 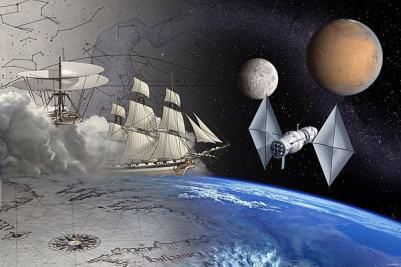 The ESA technological Aurora programme: studying the solar system and in particular the planet Mars.