The ATV is an entirely automated unmanned cargo vessel. It is a major contribution by Europe to the International Space Station and has the essential job of supplying the ISS.

Launched by Ariane 5, the ATV must regularly transport 8 tonnes of freight (gas, water, various supplies) to the station. After a 3-day journey it completes its mission and then remains moored to the ISS for 6 months. It regularly checks the altitude of the ISS, which it must lift if necessary using its propulsion system.

ATV flights will take place every 18 months until 2013. The first ATV vessel, christened Jules Verne after the writer whose death centenary was commemorated in 2005, was launched in April 2008.

Beyond the value that it represents in terms of Europe's participation in the ISS programme, the ATV is an important step in the development by Europe of its future space transport systems. It can carry out orbital transfer and rendezvous manoeuvres and is the first step by Europe in the field of the controlled re-entry technology, even though its re-entry is actually destructive. Nevertheless, it is to be regretted that with the success of the ARD mission (Atmospheric Re-entry Demonstrator, October 1998), Europe did not allocate the human and financial resources to develop a reusable ATV.

To complete its mission, a control centre, the ATV-CC, was installed at the Toulouse Space Centre in 2002. 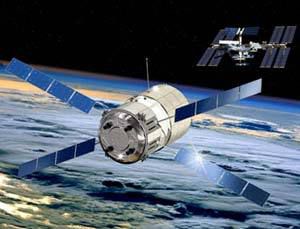