Atlas V is the latest in the family of launchers developed by Lockheed Martin in its EELV programme (Evolved Expendable Launch Vehicle). It is in direct competition with Boeing's Delta 4 for USAF launches et and on the commercial markets is a strong competitor of the European Ariane 5 rocket, the Japanese H2A, the Zenith rockets (Sea Launch) and the Chinese Long Marches.

Its development is based on the Titan and Atlas ballistic missiles decommissioned from active service in the USAF. Starting with the basic version, a two-stage Atlas V capable of putting up to 5000 kg into a geostationary transfer orbit, Lockheed Martin also offers several versions (or configurations) depending on the mission profile. 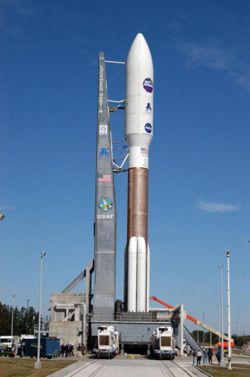 The Atlas V rocket, latest in the family of launchers developed by Lockheed Martin as part of the EELV programme. (Credits: NASA)