Ares I, (ex CLV - Crew Launch Vehicle) was the launcher component of the NASA Constellation programme that was to have placed Orion (ex CEV) in low Earth orbit. It included the various stages of a launch vehicle and sub-systems such as tanks, load-bearing structures, propulsion etc.

The name "Ares" referred to the Greek god of war, whose Roman equivalent is "Mars".
There was also "Ares V" (ex CaLV), which was to have been the heavy launcher. The names "Ares I" and "Ares V" refer back to the Apollo mission launchers: "Saturn" I and the famous "Saturn V".

In 2009, NASA successfully completed a test launch of the Aries I prototype Ares I-X. There were two objectives: to test the first stage engine, the RSRM (Redesigned Solid Rocket Motor), and the second stage separation system; then, at a speed of Mach 6, to trigger the Orion manned vehicle emergency rescue system, mounted over a dummy second stage.

Technical risk control, especially crew safety, was a priority for NASA in the development of the Ares I-Orion system. 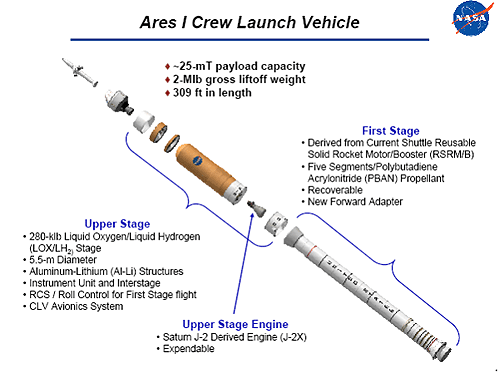 The Ares I launcher, part of the former NASA Constellation programme.