Apollo 1 was the first manned Apollo mission, and also the first fatal accident in the conquest of space.

The launch of Apollo 1 was scheduled for 21 February 1967 using a Saturn 1B rocket for the first time for a manned flight. The three astronauts, Virgil Grissom, Edward White et Roger Chaffee, were to remain in orbit for two weeks and test all the vessel's instruments that were later to be used to send men to the Moon.

On 27 January 1967, a general ground rehearsal was held with the connections between Apollo and the three ground control centres monitoring the experiment cut for the first time to simulate the moment when the Saturn 1B engines were ignited.

At that precise moment a short-circuit occurred under Grissom's seat causing the instant combustion of all the surrounding materials which were bathed in an atmosphere of pure oxygen at a pressure of 1120 hectopascals. The shock wave and fire that followed devastated the interior of the cabin, killing the three astronauts.

The cause of the disaster was blamed on repeated negligence in the building of Apollo caused by short cuts being taken in the race to the Moon, and by the cold war. Two years later, the new version of the vessel contained an Earth-like atmosphere instead of pure oxygen, and all combustible items and accessories were banished. 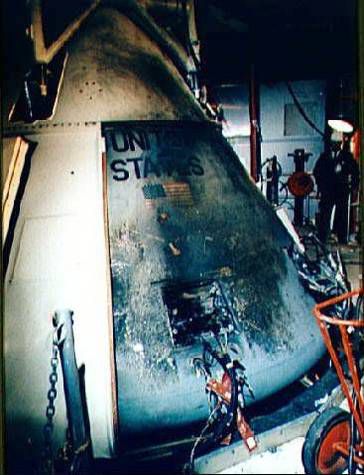 Appearance of Apollo 1 after the fire