Astro-F, renamed Akari after it was put into orbit, was a high performance infrared astronomical satellite. It was launched from Japan on 21 February 2006 and placed two weeks later in a polar orbit at about 700 kilometres altitude. Its missions: to map the sky for six months, with hitherto unequalled sensitivity, spatial resolution and wavelength range, then to focus on more precise regions of space. It gave astronomers a better understanding of formation and evolution processes in the universe.

ASTRO-F was equipped with a cooled telescope about 70 centimetres in diameter and two instruments, a far infrared instrument (FIS) and an infrared camera(IRC), to map the whole of the sky using six infrared wavelengths. These instruments also made detailed photometric and spectrometric observations of astronomical targets selected in 13 bands in the wavelength range between 2 and 180 micrometres.

In the mapping phase, ASTRO-F made a complete infrared map of our galaxy with its star nurseries, which are only observable in the infrared spectrum because their visible light is obscured by the surrounding dust.

ASTRO-F also looked for dead stars near the solar system and aborted stars, brown dwarfs, emitting a weak glow in the infrared. The satellite also searched for planetary systems located at up to a distance of 1000 light-years from the Sun and studied their formation from the disks of dust and gas enveloping the protoplanets.

The general sky survey alone led to the discovery of a million galaxies. ASTRO-F also studied the large-scale structure of the universe, observed the brightest objects quickly moving away from our galaxy and examined the formation of stars in nearby and far-off galaxies.

Among the selected observations, ASTRO-F provided complete coverage, in several wavelengths, of a wide variety of sources, such as asteroids in the solar system, brown dwarfs, disks of debris and stars in our galaxy or in neighbouring galaxies, and studied multiple extragalactic sources.

ASTRO-F was the fruit of real international collaboration. The satellite was developed by the Japanese Aerospace Exploration Agency (ISAS/JAXA) with the participation of the Universities of Nagoya and Tokyo, the National Institute for Information Technology and Communications (NICT) and other Japanese universities and institutes. Also involved were South Korea, the ESA, a consortium of British universities (Imperial College London, Open University, University of Sussex), financed by the British Particle Physics and Astronomy Research Council (PPARC), together with the Dutch Space Research Institute (SRON) and the University of Groningue (Netherlands).

Ground station support by the ESA was managed by the European Space Operation Centre (ESOC). The ESA European Space Astronomy Centre (ESAC) was is in charge of rebuilding the results and support for European open observation time users. 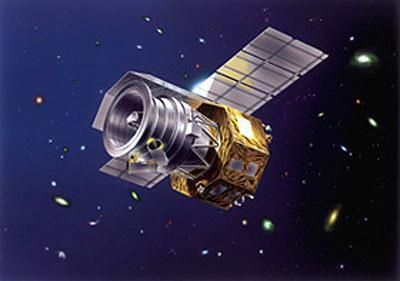