Solar Impulse is a firm founded in Switzerland by Bertrand Piccard, a psychiatrist, and André Borschberg, an entrepreneur, to build an aircraft powered only by solar energy with the aim of flying round the world with stop-offs in 2014.

Bertrand Piccard is an aircraft and balloon pilot. In 1999 he flew non-stop around the world in a balloon accompanied by Brian Jones, on board the Breitling Orbiter 3. He is the son of Jacques Piccard, the oceanographer, and the grandson of Auguste Piccard, the physicist, balloonist and designer of the first bathyscape. André Borschberg is a former fighter pilot and professional aircraft and helicopter pilot.

The specifications of Solar Impulse

Between 2003 and 2009, the team designed and built a prototype single-seater solar aircraft, registered HB-SIA (HB is the code for Swiss aircraft, SI for Solar Impulse and A for the first of its kind). This single-seater has a wingspan of 63.40 metres (about that of the Airbus A340), weighs 1.6 tonnes (which is very little) and carries 11,628 photovoltaic cells spread over its wings (10,748) and on the horizontal stabiliser at the rear (880). The electric energy produced is stored in 400 kilos of lithium-ion batteries and powers four 10 horsepower electric motors each driving a propeller.

The aircraft has flown many times since December 2009 including internationally: Payerne (Switzerland)-Brussels on 13 May 2011, Brussels-Le Bourget on 15 June 2011 and Le Bourget-Payerne on 4 July 2011. On 7 and 8 July 2010, the HB-SIA made a flight of 26 hours 15 minutes including a complete night. In flight in a sunny sky the aircraft produces more electricity than it consumes.

In July 2011, Solar Impulse began building the HB-SIB that will attempt to fly round the world. 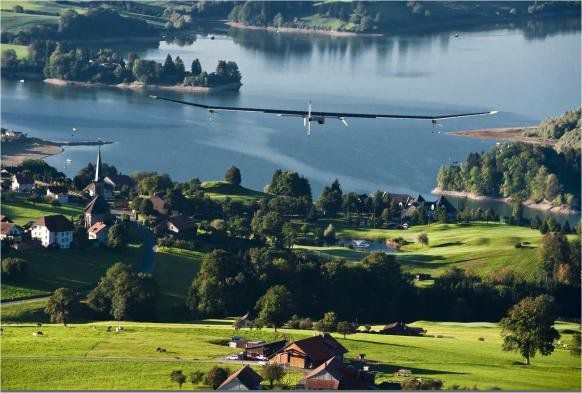 The HB-SIA flying over the Swiss countryside before landing at Geneva-Cointrin airport in September 2010 during a flight across Switzerland. © Solar Impulse