Jatropha is a tough leaved shrub that ordinarily grows in very dry soil. There are about 160 species of jatropha found in South America, Africa and Asia. Its red berries and sap are extremely toxic and were used in the past for their medicinal properties. Just a few seeds can kill a person. Due to the danger jatropha poses to animals and man jatropha farming was banned in Western Australia (a state in Australia).

However the plant has several advantages for use as a source of agrofuel. The seeds contain about 35% of oil. This product is suitable for use in the production of fuel for Diesel Cycle Engines. Its high yield can exceed one thousand litres per hectare per year, which is much more than classic sources of biofuels. The plant lives and produces for 35 years.

As Jatropha is not edible and grows in poor soil where regular farming is impossible, it does not compete with food production farming and consumes little water. Its promoters consider it highly unlikely that jatropha farming could cause mass deforestation.

This " green gold " (as it is sometimes called) is heralded as a source of second-generation agrofuel, alongside algae and plant waste. First-generation agrofuels are extracted from oil-producing plants such as rapeseed or sunflower, or plants with high sugar content (beet, sugar cane, corn, wheat, etc.) used to produce alcohol for petrol engines.

Jatropha is already farmed, often intensively, in Asia, the United States, Saudi Arabia and in Europe. Its farming has also been promoted among small farming operations. The anticipated yields are not always obtained, especially in very dry soil. The most widely used species is Jatropha curcas.

In December 2008, Air New Zealand flew a Boeing 747 partially fuelled with a jatropha biofuel called Bio-Jet (by analogy with Jet A1 the classic aviation fuel) and developed in partnership with Boeing, Rolls-Royce (the manufacturer of turbo reactors) and Terasol Energy (which provided the initial product), among other project participants. 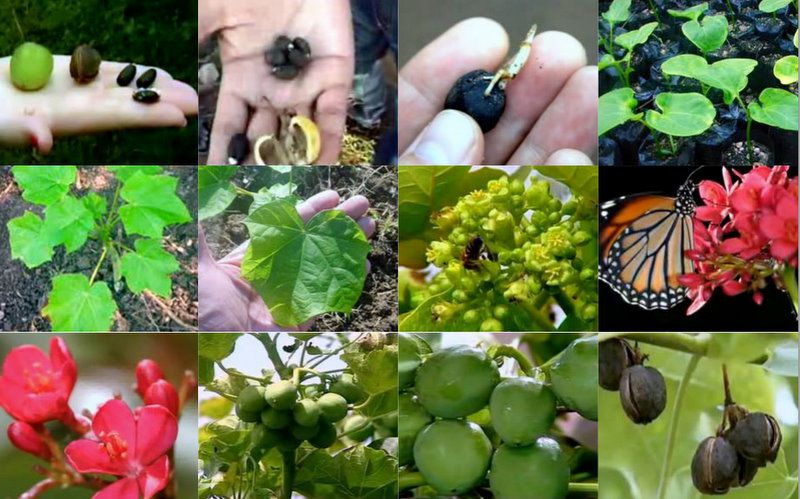 All the stages of growth of Jatropha Curcas. © Licence Commons