A first generation biofuel is an agrofuel produced from crops traditionally intended for food production. More specifically, the storage organs of oil producing plants or sugar producing plants are used to produce biodiesel or ethanol fuel.

For example, a field of rapeseed may produce cooking oil or biofuel.

The biofuels currently on the market, called first generation biofuels, are therefore produced from the conversion of food crops into sources of energy, rather than into food products. Consequently, the production of these biofuels competes with food production and therefore with the availability and prices of food around the world.

One of the biggest criticisms of biofuels is this competition between biofuels and essential products, in addition to its environmental performance.

To address this issue, researchers and engineers are trying to develop biofuels from non-food plant sources, such as lignin and cellulose. These biofuels are called second generation biofuels. 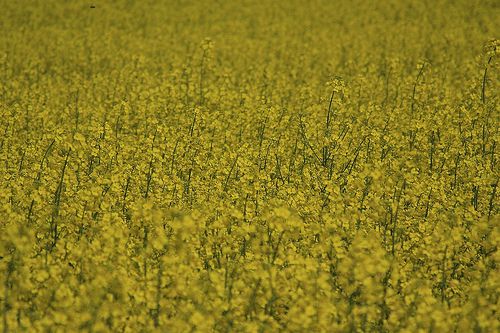 Rapeseed, a crop that can produce cooking oil or biofuel. Which one should we choose? © Mlle Bé CC by-nc-sa 2.0