The droplet plume technique is one of the solutions envisaged for storing CO2 in the oceans after it is captured.

This technique is based on the fact that liquid carbon dioxide is less dense than sea water at intermediary depths, and that sea water enriched with dissolved CO2 is denser than normal sea water.

Consequently, when liquid CO2 or liquid CO2 mixed with gaseous CO2 is injected at a depth of about 1,000 metres from the coast or a gas tanker, floating droplets of CO2 form. An ascending plume of droplets is then created, which is conducive to the dispersion and dissolution of CO2 in sea water. The water, enriched with carbon dioxide, is denser and dives into the depths.

A technique that benefits ecology

By privileging the most turbulent injection zones, with the quickest currents, the dispersion of CO2 (harmful to marine organisms) is maximised and the local drop in pH is limited. The Droplet plume technique should therefore have a lower ecological impact than the Dense plume technique.

Limits of this technique

Besides the questions concerning its environmental effects, the injection of CO2 into the oceans poses a legal problem: the London Convention prohibits the dumping of waste at sea. The question is whether or not CO2 can be considered to be waste and therefore whether or not this convention applies. 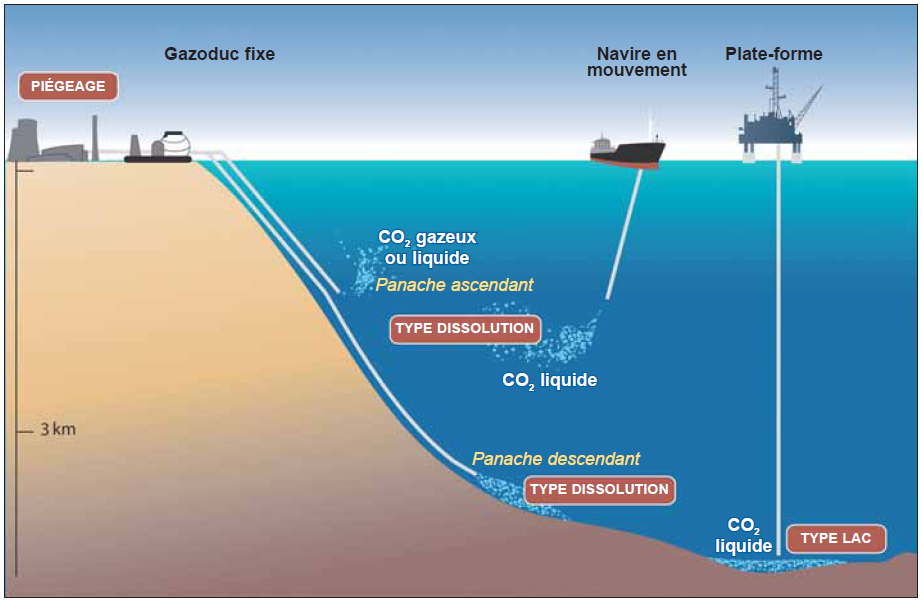 Different techniques for storing CO2 in the oceans. The Droplet plume technique can be used with a land-based slurry pipeline or from a pipe-line towed by a ship. © CO2CRC