Biodiversity, in the etymological sense of the word, refers to the diversity of life, meaning all of the processes, life forms and functions that work to keep an organism alive. This term is much too broad to have any real scientific connotation. The term was popular in the past but has gradually disappeared from the language of life sciences.

The term 'biological diversity' is better adapted to describe the variety of life forms (functions) of one or several organisms. We could also use 'species, animal or plant diversity' when discussing the diversification of plant or animal species, genetic diversity to refer to intraspecies variability, functional diversity to define the key functions performed by a species group, etc.

Finally, the term biodiversity is generally limited and used only to describe different methods of diversification. Biodiversity is not a field of study, it is only a concept. Researchers who work to characterise the diversity of life forms contribute to knowledge of biodiversity.

Biodiversity, a contraction of "biological diversity", is an expression used to describe the variety and diversity of the living world. In a wider sense this word is almost a synonym for "life on earth". Each region has its own unique species. Species unique to one region are called endemic species, meaning that they are limited to a certain geographic area. Generally speaking, fewer species are found on islands than in equally sized mainland areas, but often islands have a higher percentage of animals that are not found anywhere else in the world.

In other terms, islands have less richness of species, but higher endemism. Man has contributed, and still contributes, to significant reductions in biodiversity. The decrease in animal and plant populations, the extinction or endangerment of certain species and the simplification of ecosystems are obvious proof of this. 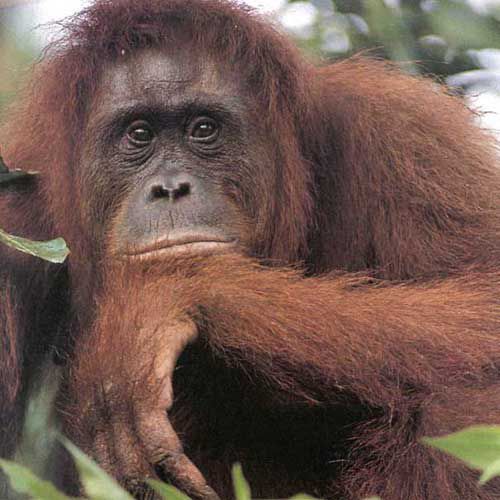 The orang-utan, an endangered great ape. The biodiversity of our planet decreases every second. Credits: DR.