The Whale constellation, or Cetus from the Latin for whale, is the fourth largest constellation in the sky. It is located below the constellation of Pisces. Its main stars are Mira and Diphda. Three meteorite swarms are associated with it: the October Cetids, the Eta Cetids and the Omicron Cetids.

In Greek mythology, the Whale constellation represents the sea monster that Poseidon sent to destroy all forms of life to take revenge on Cassiopeia who had declared her daughter to be as beautiful as the Nereids, daughters of Nereus and Doris, one of whom was the wife of Poseidon himself. It is also said to represent the whale that swallowed Jonah in the Bible. 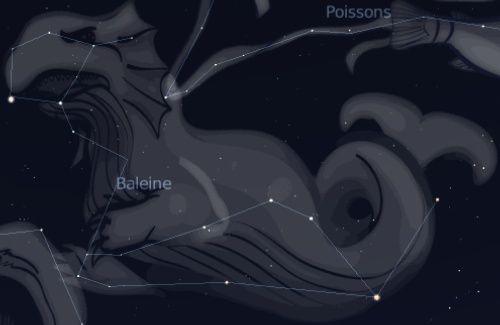